A return to France. The Tarn.

Where to begin?
I've been pretty fortunate so far this year in that I have finally started to pursue and take my climbing further afield. Away from the comforts and the increasingly tedious and often boring nature of the UK.

The Gorges du Tarn. Every climber has heard of this French stomping ground. Situated just outside of Millau in the Midi-Pyrenees, lies a beautiful deep gorge, carved out by the ages with towering rock faces as far as the eye can see.
When I arrived home from Spain my original plan was to head back out during the autumn to catch some much needed cooler temps. However plans end up changing like the wind and I got asked by my very good friends, Jon and Pete Clark, if we fancied a couple of weeks in the Tarn. These guys have got this place totally dialled up, having both made around six or seven trips in the past. They would do all the driving and organising and basically chauffeur me around for the entire time. How could I refuse! It was an easy decision to make.

I said yes within an instant. The idea of a jolly in the sun even got my Dad tempted and so for the first time he decided to join us on a euro adventure. Four Brits on tour!

Even though my experience of foreign climbing destinations is still rather limited, I've got to say that I think this place has the most amount of rock that I have ever seen! Route styles range from short bouldery gnarl to huge 100 metre+ outings, with grades across the entire spectrum. The adage of there being something for everyone could not be more true for this place.
One thing to bear in mind though, is that this is France. It's old school in parts and certainly not a place for cheap Spanish holiday grades that is for sure. They make you work hard for your route of choice out here! 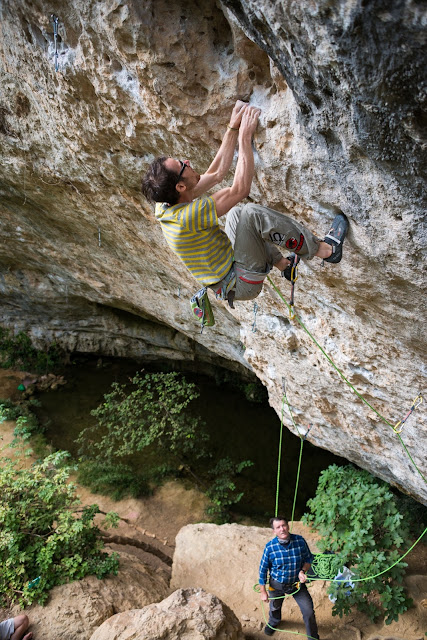 Driving up through the gorge on our first day, our eyes hardly knew where to look first. Akin to memories of the first time we ever drove up the Llanberis Pass. 'Like a kid in a candy shop' I remember it well. Seeing the Cromlech for the first time was out of this world. The itch and fire to start climbing increasing with every turn in the road, as another huge sector would come into view. Our faces pressed up against the car windows, straining to see but unable to take it all in.
Huge blank walls flanking us on both sides. Steep prows and towers standing tall and casting enormous shadows. The river flowing below us, kayakers gently making their way down in the sunshine. I kind of knew what to expect after hearing so much about the place and seeing all the photos/videos, but to see the place in the flesh was breath taking. 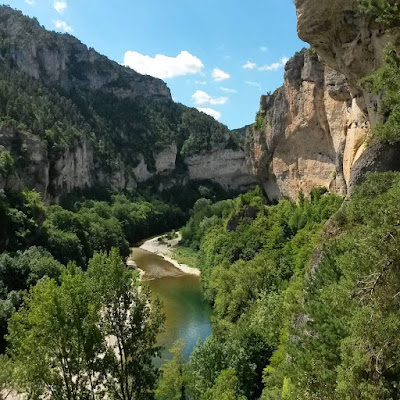 What makes the whole thing even more spectacular is that the big established crags suddenly seem to come into view out of no where. You spend a good amount of time twisting, turning, winding and weaving your way up from Millau, past farms, fields, the odd 'village' and tiny pockets of civilisation and then BAM. You turn a corner and you are there. Paradise. Neck ache from craning your head up against the car windows is something that you just have to accept!
The one thing that was so blindly obvious from the start was how much cooler it was down here than the 2 weeks prior in Rodellar. You could actually breathe, and walk about without verging on collasping in a heap! 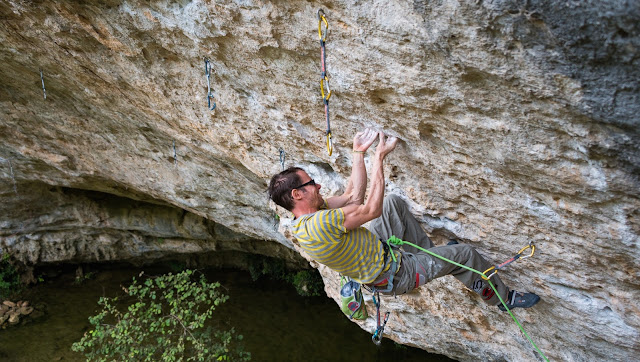 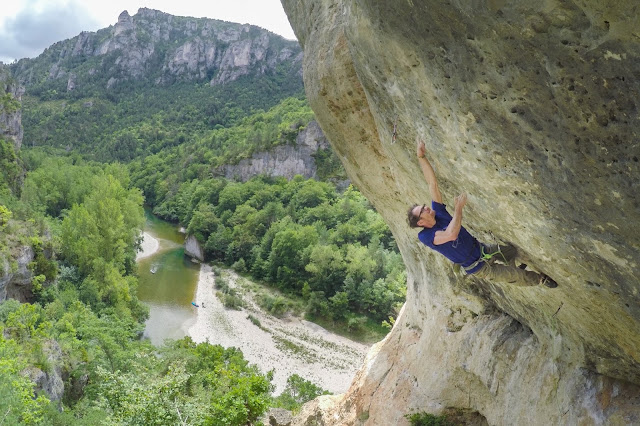 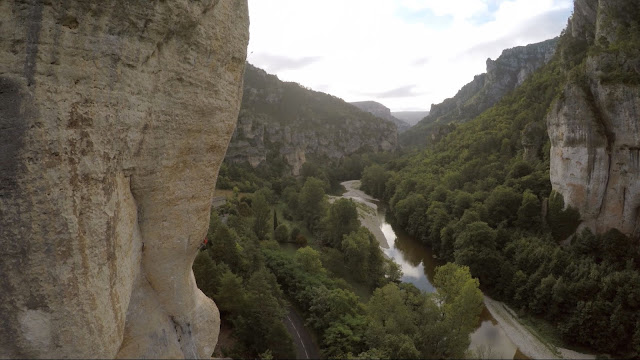 Being the only one of us all who would be climbing meant I was free to climb from route to route, and pick any crag I fancied for the day. It was definitely a bit of luxury and I am super grateful for the all the guys time, belays, commitment and effort they gave me. But it did mean we had to be careful not to constantly go full burn the entire time!
In between belaying Pete would disappear daily off up one of the gorges for a couple of hours and bosh out the odd 100 mile on his road bike! The guys dedication, commitment and psyche astounds me. It is hugely motivating when someone like that is so passionate about their goals and what they want to do. 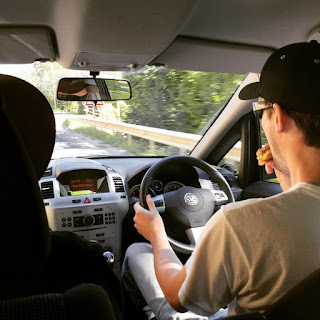 The daily crag commute with the obligatory patisserie stop off. 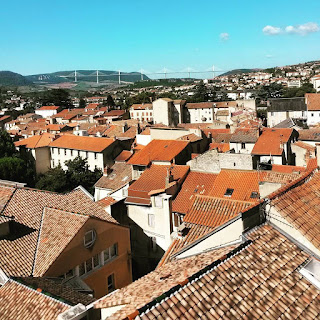 Rest days were needed and luckily there was always something to do in town. Side streets full of little shops, cafes and bakeries to discover. Old buildings to walk around and explore. Millau is an historic place that is always bustling with life and colour, a hive of activity, with a weekly market that blew us away. Such a variety of food from all over. Stalls laden with local fresh fruit n produce, beautiful, straight out of the oven baguettes and enough pastries and cakes that left you not knowing what to try first. The mind boggled!
We would then retire back to the campsite and doss around in the sunshine, chat late into the evening before hitting the sack, already fired up and champing at the bit for the morning to come round and with it, a new climbing day. Life could not have been simplier. 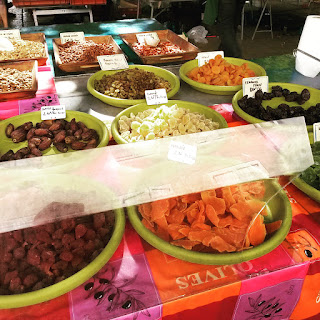 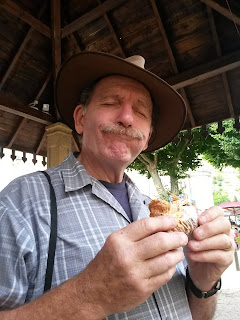 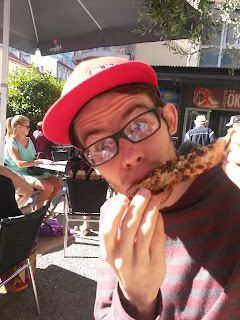 One afternoon we joined JC and Pete for a hike up to the top of Gorge du Jonte. Home of the majestic vultures! The lads had already trekked to see these huge beasts a few days before and we figured it was an opportunity not to be missed. Seeing these creatures up close at 3000 feet, circling above your head and hearing the wind whip up all around you, was breathtaking and a pretty special way to end a day. These birds are always made out to be nasty, dirty and evil things and while they may be scavengers there is no doubt that they are magnificent creatures and with their 8 foot wingspan they truly are a sight to behold. 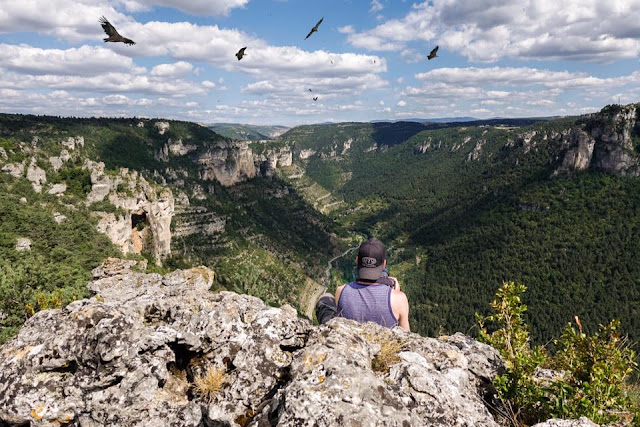 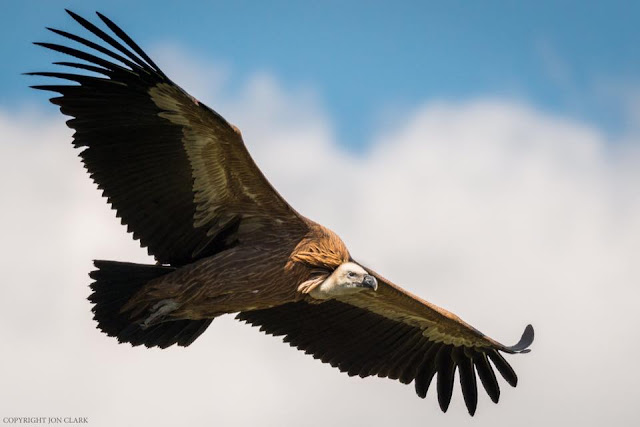 We visited such a huge range of crags and climbed such an abundance of fantastic routes, that I am sure it would eventually bore you to death to read about them all.
Every day was a good day but one of the stand out days was the session I power screamed my way up one of the areas hardcore pocket pulling test pieces. No surprises that this line resides at the aptly named sector 'Gullich'! The steep and fierce 'Le Spectre de l'ottokar', clocks in at around 8b+ and stands proud, jutting out high above the winding river below. A route that would fit like a glove in the forests of the Frankenjura.
It still amazes me how some of these routes are so perfectly formed. Each pocket immaculately shaped for a human hand and fingers. And not just shaped, but positioned in such a way that it creates one exact sequence of moves. I find it all rather bizarre but it really is like these cliff faces were always made to be climbed, but somehow it has just taken centuries for the human race to realise. 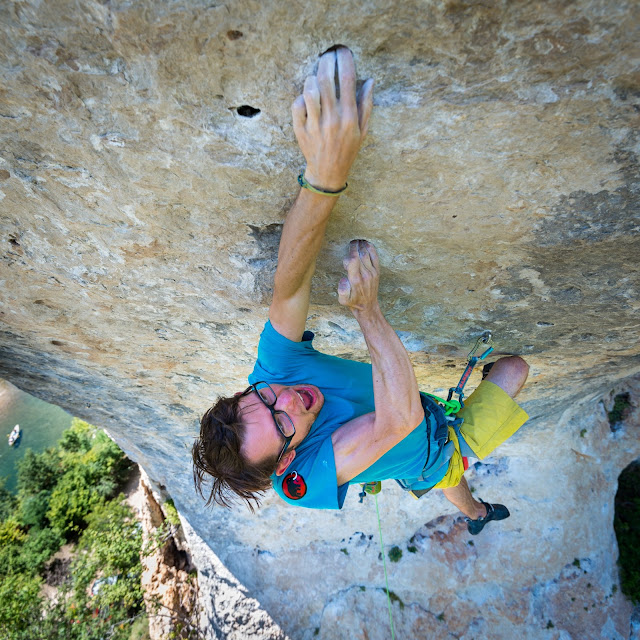 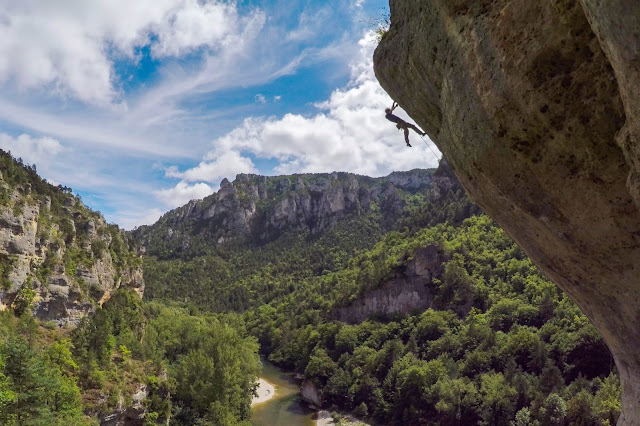 It was full pedal to the metal, all out screaming on every move throughout the crux sequence. A very memorable experience and to managed to get it done on my 2nd try made the success even sweeter!
Afterwards we trekked slightly higher up the gorge for the classic 7a and mega popular route 'Le Trésor du Zèbre'. For anyone visiting the Tarn, this route is a must! It is probably one of my most favourite routes I have EVER done, an absolute gem of a line on some of the biggest and craziest holds you can think of. A huge diagonal traversing pitch across pristine rock, with truly breathtaking scenery all around. One of the best positions you could wish for and the swing after stripping the draws is rather spectacular too! 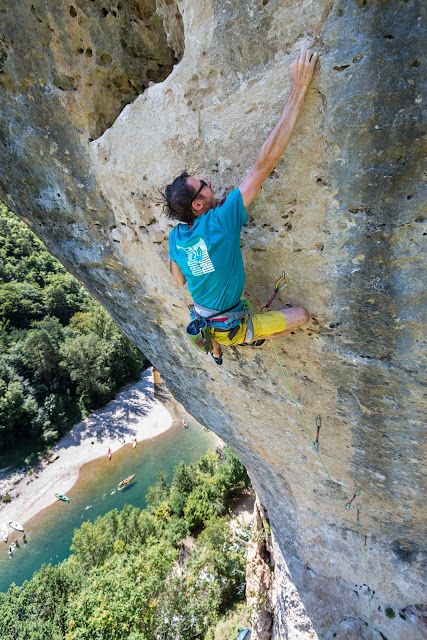 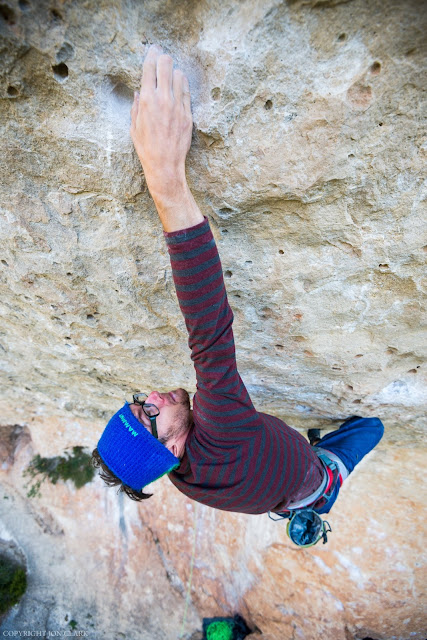 I could probably write an entire blog about Cantobre alone. The ancient, fortified medieval village itself sits atop a rocky outcrop in the middle of the Dourbie valley and looks out across at the streaky, rainbow limestone cliff. It truly is a fantastic place, full of history that spans the ages. Stone Age man once roamed about these parts, the Celts have been here, the Romans, Saracens, the list goes on. It is perhaps more well known however for being a bastion of the Knights Templar. Everyone seems to have wanted a piece of the pie at some point! These days however its occupants and visitors are slightly different.
The cliff is something akin to Ceuse, albeit on a much smaller scale. A multi-coloured swooping wave of compact rock, carved out through the ages with routes left, right and centre that range from 7a to 8c! It is a climbers playground and I quickly found it to be totally my style. It was plain to see straight away why JC had been ranting on about this place for so long and urging us to make the trip. 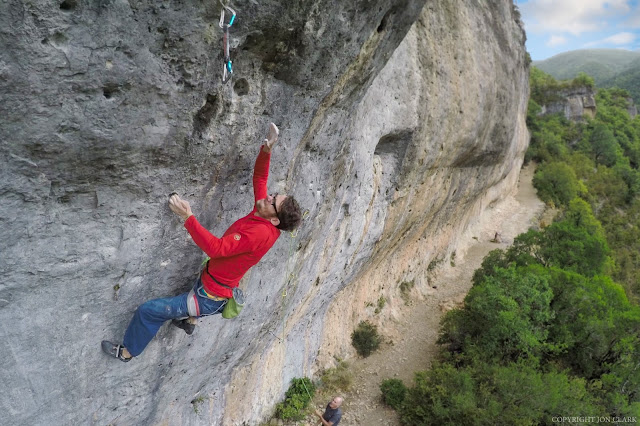 The general style here is big moves, powerful lock offs, and pockets, pockets, pockets galore, before many of the lines ease off as the crag begins to slab out at about half height. You have to be prepared to go big on some of these but with the safe knowledge that you'll soon reach a bucket of joy ahead.

We made a vague plan to return on our final day before starting the long drive back home. As the crag virtually gets full sun throughout the summer period we crossed our fingers the night before in the hope some cloud would roll in. And boy did it come good! 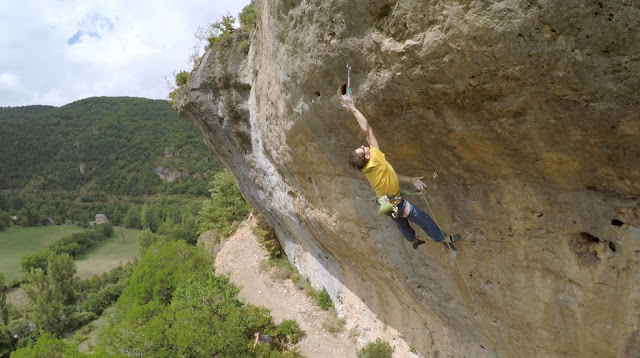 We awoke the next day to perfect cloud cover, and an incredible mild breeze made for some of the best climbing conditions I've ever experienced. Thankfully we were able to make it count. A quick stop for bread and we made the easy, quiet drive up through the Dourbie.
Within the first hour an onsight of the classic 8a of the crag 'Les Dernières Plantations du Christ' was in the bag and then the true prize of the day was my surprise first 8a+ onsight, 'Torticolis'. What a beauty! Big all out leaps between pockets and a head wall to rival climbing in Ceuse made for one very unforgettable climb. It was one of my best and favourite days of rock climbing I have ever had and the perfect way to round off a fantastic 2 weeks.
We celebrated back at camp with a brew and one final pain aux raisin before bidding Millau au revoir, and then began the journey home.

I seriously cannot thank Pete and Jon enough for all the driving they did and for showing us a such a good time! Not to mention all the sick photos! It is a trip that will sit long in the memory and I already cannot wait to make another journey out here next spring for some unfinished business and to sample more of what this wonderful part of the world has to offer.

Here's to our next adventure together chaps! Wherever that may be... :) 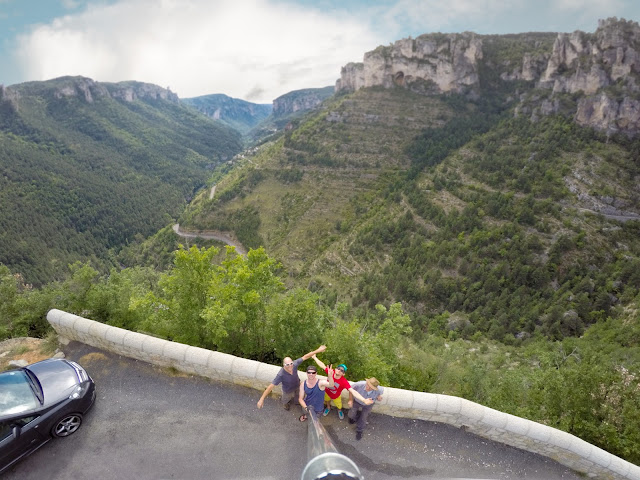 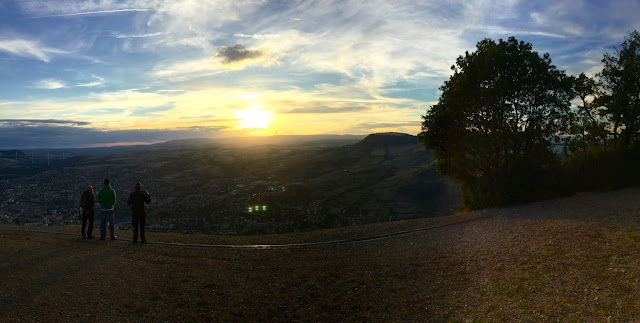 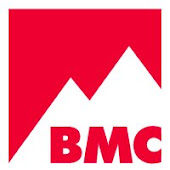